My cousin was driving down a busy road coming from the mall going home to meet her kids at the bus stop. I was in the passenger’s seat; all of us buckled in safely. Traffic was a nightmare and we were hoping to make it back in time. Mila was sleeping soundly in her rear-facing car seat. Ella was making her usual noises, refusing to sleep. Kim and I were chatting along, talking about how we should have left a few minutes earlier.

Out of what seemed to be nowhere came a deer. POUND! It hit the window of the van on the passenger’s side. We didn’t see it coming and were shocked that a deer was even in the vicinity with all of the traffic noise. I must have been in mid-sentence because I had glass in my mouth. Kim immediately stopped the van and slowly pulled over to the shoulder. She asked if I was ok and in a flash we were checking on the babies. Mila was screaming and Ella was surprisingly asleep!

A few people stopped to ask if we were ok. Kim moved the van across the street to a driveway owned by a nice family that suggested we pull off of the narrow road. We spent hours chatting with this family and with the cops when they arrived. Several people went off looking for the deer or any sign of it. Kim’s husband arrived to take us all home while the tow truck took the poor, damaged van to the shop.

Here is the aftermath: 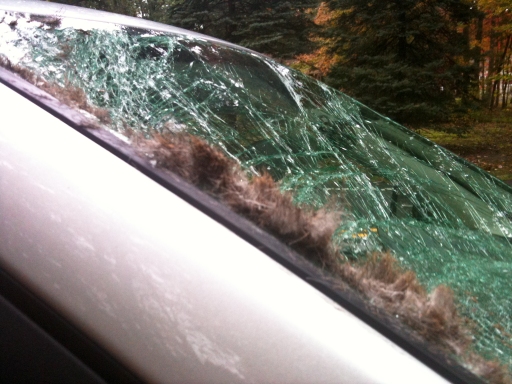 I’m so proud of Kim for keeping her composure and making sure we were all safe. She handled the accident like a pro and didn’t freak out in the least. She was shaken up bad and her emotions reached the surface only after she had everything under control. Everyone is fine and we never did find that deer.