Six months was amazing; so many new things! At this point I really can’t pick a favorite age – every month has it’s new joys. By the time 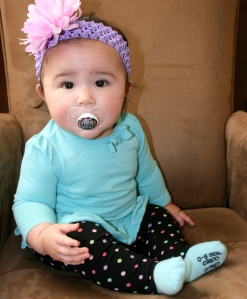 Mila was 6-months-old, she was reaching for things, rolling, and stretching. Mila could sit up on her own and actually preferred it.

Mila responds to her name, occasionally.
“Mom” went away and then came back, and Mila finally said, “dah!” We were driving and out of the backseat we hear “da-da!” I looked over to see Dan smiling, ear-to-ear. There was the true sense of that expression at that moment and everything shifted.

Mila has acquired the desire to stand. One day when I came home from work, Dan showed me how he taught Mila to “1, 2, 3…stand”. She loved having her arms lifted and scrambled to a standing position all on her own. 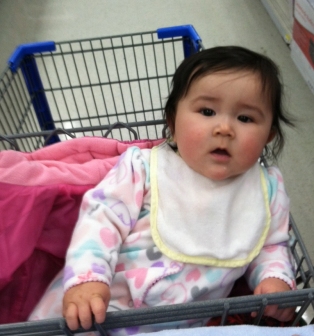 Mila has started scooting, or more precisely, bouncing on her bottom to move around. She’s like an upright bunny!

At some point this month, we stopped using the 3-6 month clothes and her jungle mat was neatly put away for another baby, another time.

Mila’s eating more solids and has attempted a sippy cup and done great! Of course, at the time of writing this, she hasn’t quite done as well since.

Mila drools like crazy, (like a ‘kitchen faucet’, if you ask Uncle Dave P.) and began to mock-chew. I got her puffs and she loves them. Watching her with these is very amusing. 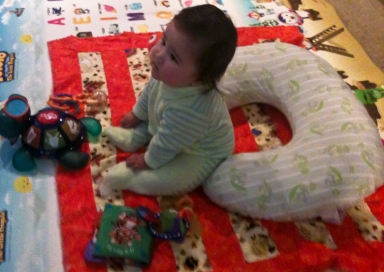 I remember thinking back to Mila at only a couple of months old, her head laying on my chest, as I rocked her to sleep. There was one time that I thought, “one day she won’t do this”. Before I knew it, I had to cradle her in my arms to put her to sleep. There is only an occasional, few-and-far-between time that Mila will lay her head on my chest or shoulder and I eat it up! 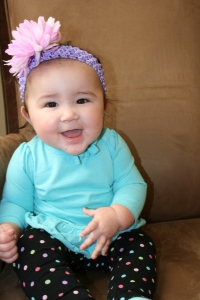 She has started lifting her arms to let us know she wants picked up/out of her bouncer. She puts her own binky in her mouth — even when she’s sleeping.

By the end of six months, Mila was spending more time on her belly and moving in 360 degree circles to get objects she wanted. She’s trying harder and harder to crawl.

I have been back to work for 3 months and the best part of my work day is coming home to an excited, kicking Mila! The whole world disappears when I see that smiling face.